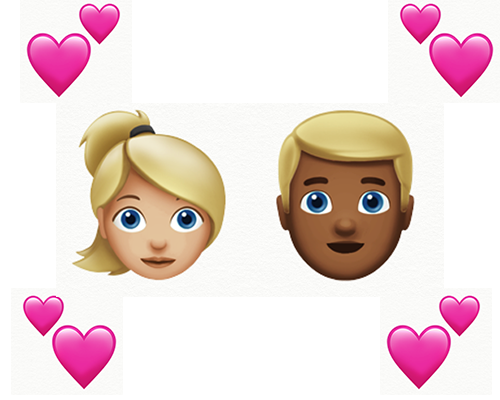 So, now we have same-sex couple emojis, opposite couples emojis… is it enough? Far from it!

There’s an emoji for everything. Well almost everything. Isn’t it time emoji represented all love?

Tinder’s emoji proposal is co-authored by Jennifer 8. Lee, creator of the Dumpling Emoji Project, and Alexis Ohanian, co-founder of Reddit. Lee and Ohanian worked together to pilot the hijab emoji in 2016, and are continuing their work with the Interracial Emoji Couple Project. Their request? Three emoji skin tone options for each person in the💑 emoji.

From the birth of Emoji, people have called for more representation–emoji with different skin colors, same sex emoji couples, and families with same sex parents, to name a few. This past February, Apple submitted an official proposal  to the Unicode Consortium for emojis representing people with disabilities.

Considering interracial marriage has been legal for over fifty years (or even if it wasn’t), um yeah, it’s time. As of 2017, one in six people in the United States  will marry a partner of a different race, which doesn’t include unmarried couples.

“It’s like that Cheerios commercial,” said Abigail Gonzales, who married her husband Enrique in 2012 . “It’s the face of the modern developed world. Everybody wants to be represented in visual culture, and Emojis are a new language that people use to express emotion.”

Emoji Foundation founder Niki Selken agrees. “It would mean a lot to have an interracial Emoji personally, as I am one-half of an interracial couple.”

Could interracial family emojis be next? We hope so!