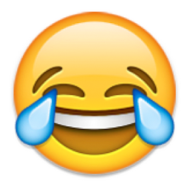 Oxford Dictionaries made history on Monday by announcing that their “Word of the Year” would not be one of those old-fashioned, string-of-letters-type words at all. The flag their editors are planting to sum up who we were in 2015 is this pictograph, an acknowledgement of just how popular these pictures have become in our (digital) daily lives:

“Although emoji have been a staple of texting teens for some time, emoji culture exploded into the global mainstream over the past year,” the company’s team wrote in a press release. “Emoji have come to embody a core aspect of living in a digital world that is visually driven, emotionally expressive, and obsessively immediate.”

Oxford University Press—which publishes both the august Oxford English Dictionary and the lower-brow, more-modern Oxford Dictionaries Online—partnered with keyboard-app company SwiftKey to determine which emoji was getting the most play this past year. According to their data, the “Face With Tears of Joy” emoji, also known as LOL Emoji or Laughing Emoji, comprised nearly 20% of all emoji use in the U.S. and the U.K., where Oxford is based. The runner-up in the U.S., with 9% of usage, was this number:

One Comment on “Oxford’s word of the Year is an Emoji!”